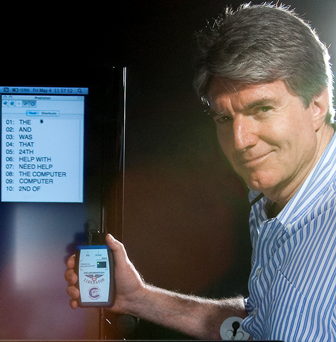 Andrew Gaze is a 5 times Olympian, and Australia's greatest ever Basketballer. Leading fro ...

2016 Young Australian of the Year, Founders of Orange Sky Laundry

Nic Marchesi and Lucas Patchett are best mates and joint winners of the 2016 Young Austral ...

Peter Ford is the extraordinary mind behind NeuroNode – a device that is revolutionising the lives of people with profound disabilities – that he beta-tested with Prof. Stephen Hawking. In 2003, having asked Peter to install the system on his powered wheelchair, the first sentence the great man famously chose was, “I am always being mistaken for Stephen Hawking.”

NeuroNode – formerly known as NeuroSwitch – can pick up tiny movements of a muscle and synchronise them with a cursor shining up and down the rows of a virtual keyboard. Around the world war veterans, school students with disabilities, and patients with traumatic brain injuries, spinal cord injuries motor neurone disease and cerebral palsy, are using the evice to communicate and manage their lives by connecting to tablets and mobile phones to manage daily tasks like emailing, operating equipment, and even driving a remote presence robot.

As Australia’s first News Anchor at CNN and CNN2 in Atlanta, a former NSW Senior Australian of the Year, and a member of Mensa, Peter is a natural speaker who never fails to inspire audiences. His presentations include live demonstrations of NeuroSwitch, during which members of the audience control a computer with their own neural signals.

Peter Ford began his career as a journalist in Warwick, QLD, with newspapers, magazines, radio in Toowoomba, and television at NEN9, Tamworth, and Seven News, Sydney, before moving to the USA and CNN in 1981.

For the next two decades, he covered Space Shuttle missions at Kennedy Space Center, high technology, the Pentagon and military systems, and reported live from Moscow, the Vatican, Operations Desert Storm and Desert Shield in the Persian Gulf, and the Sydney Olympics, for NBC News Channel and its network affiliates across the USA. Immediately after 9/11, NBC assigned him to Pakistan and the Northwest Frontier, and Afghanistan, where he and his news team were embedded with mujahideen fighters, covering the siege on Osama bin Laden at Tora Bora in Nangarhar Province.

During his time with CNN, Peter began developing virtual robotics programs on one of the first Apple desktop computers. A satellite tracking program he wrote plotted the orbital path and accurately predicted the crash site of the Soviet nuclear-powered satellite Kosmos 1402 in the Indian Ocean in 1983: the computer program was broadcast live on CNN.

While he was at CNN, he was invited to join one of the first Rehabilitation R&D laboratories created by the US Veterans Administration to develop new communications and control systems for people with severe disabilities. A copy of one of his first programs was sent to Prof. Hawking at Cambridge, and Apple Computer Inc. donated a portable computer to run it.

For two decades, while he was a News Anchor in Miami, Florida, during the cocaine wars, and then in Washington DC, reporting from the White House and The Pentagon, he also worked pro bono as a software consultant, developing unconventional computer interfaces to enable people with disabilities to access everything usually controlled by a keyboard or mouse.

In 1999, he was asked by Prof. Bernard Brucker of the University of Miami School of Medicine to consult on a patient in Houston, so disabled in a car accident that he was unable to control any conventional form of communication: he could not even blink or move his eyes. Peter created software to re-task electromyograph data from a clinical EMG monitor, built by James Schorey at Therapeutic Alliances Inc in the USA. The system captured a minuscule electrical signal in the patient’s arm, enabling him to make a computer “beep” in response to questions.

In the next three years, Peter evolved that “beep” code into a system that enabled a person to use faint electrical signals inside an otherwise disabled muscle, to control text sentences on a computer, and play pre-recorded words and phrases.

The communications system that began with that tiny “beep” in Houston has evolved as NeuroSwitch, which has helped people with profound disabilities reconnect with their families, carers, doctors, therapists and friends in Australia, New Zealand, the USA, UK and Europe.

In 2012, The Australian senior technology writer, Chris Griffith reported on Anybots, a telepresence robotics company in Silicon Valley that enabled people to virtually “be” anywhere on the planet with 2-way live audio visual communication through a rolling robot, indoors and outside. Peter invited Chris to control the system with neural signals, using NeuroSwitch. Now people otherwise locked in by disability can use NeuroSwitch to drive an Anybots around its factory floor and converse using computer-generated speech with anyone in the building.

The US Veterans Administration fully funds NeuroNode for qualified veterans.

Also in 2015, the Australian National Disability Insurance Agency funded the first NeuroSwitch system for a client with motor neuron disease.

In 2016, Google met with Peter Ford in Mountain View, CA to discuss expanding the system to Android platforms.

Now, NeuroNode is enabling anyone to control their computer, TV, lights, phones, tablets and their smart homes, along with Skype camera calls, and robotics, wirelessly and with neural signals through a painless, simple adhesive patch on your skin.

As the world begins to ask what happens when Artificial Intelligence (AI) machines become smarter than we are, NeuroNode is on the leading edge of enabling us to control the same systems with our own neural signals – building on the bionic foundations laid by heart pacemakers and the revolutionary Cochlear hearing system, to make us all functionally bionic.

Peter is the author of The Keeper of Dreams published in New York by Simon & Schuster.

In 2018, Peter Ford’s work was internationally acknowledged when he won the Pitch at the Palace Commonwealth Boot Camp, a business event in London initiated by the Duke of York. He was the subject of an ABC Australian Story episode in 2013; and was appointed 2014 NSW Senior Australian of the Year. He is a member of Mensa, since 1992; was Rodeo Sportswriter of the Year in Australia in 1978; and wrote the lyrics to the title track of the Country Music album, Goin’ Rodeoin’.

In what was one of the standout presentations at the prestigious 2015 World Medical Innovation Forum in Boston, Peter Ford galvanized the audience with his live patient demonstration of NeuroSwitch, a radical communication technology that he developed to help people who are unable to move or speak.

It was wonderful to have Peter share his knowledge and passion with our team. He gave both a compelling and inspiring presentation on the technology he’s created and the amazing impact it can have on people’s lives. Many people commented afterwards about how important it is to keep the bigger picture in mind for everything we do. Peters work and engaging presentation style was great for an audience motivated by technology and innovation.