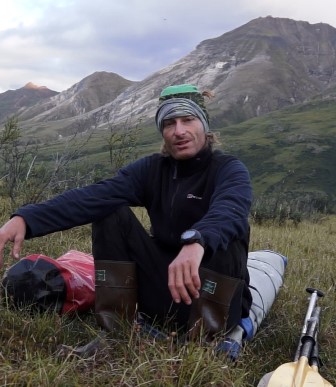 Marc Fennell is an experienced interviewer, presenter, journalist and author, who has work ...

David Campese is widely regarded as the greatest rugby player of his generation. In an int ...

Tasmanian, 2009 Young Australian of the Year

Sam Cawthorn is a survivor. Having been resuscitated after a major car accident that had h ...

In 2012 adventurer John Cantor achieved a six-year dream of traversing the Brooks Range solo, a 1,600 km expedition across Arctic Alaska and considered one of the toughest solo expeditions on earth. Almost completely devoid of human presence, this environment is full of grizzly bears, wolves and countless other animals.

With no previous experience and only blind self-belief, this young surfer from Noosa Heads, Queensland, had set himself a near- impossible goal. There were only four documented solo traverses of the range prior to this, all of whom were Americans.

After failing on three successive attempts in three consecutive years, John realised he was banging his head against a brick wall, so took 2011 off and adopted a completely different approach to the expedition. He broke it down into little battles and worked on perfecting each element. John finally completed the expedition in 31-and-a-half days, setting a speed record for the traverse.

During this time John also battled with chronic knee and back injuries, severe anxiety, and huge financial costs working up to three jobs at a time.

John’s expedition was featured on the ABC’s Australian Story and was the most downloaded episode for 2012. His book about his journey will be turned into a feature length documentary using the footage he shot over the six years.

For his next expedition, the Winter Traverse, John and his expedition partner, fellow adventurer Evan Howard, flew to Alaska in January 2014 but had to pull the plug on the 10th day due to John developing frostbite. They had been smashed by severe weather on the first three days, not allowing them any time to acclimatise. John battled on through agonising pain in his fingers for another week before making the hard decision to end the trip and saved his fingers from permanent damage.

Although not the result John had hoped for, he took solace from knowing this time his preparation and execution had been near flawless. However, these experiences have only made him stronger and his next trip is already in the making. In June 2014 John will return to Alaska to climb Denali, North America’s highest mountain.

John Cantor has inspired companies, sports teams, organisations and schools with his adventures and the lessons he has learned from them. His presentations focus on determination, resilience, turning failure into a positive, goal setting, overcoming adversity, positive self-belief, earning the desire to achieve something remarkable and understanding fear and anxiety. He is also a Beyondblue ambassador and speaks about his own bouts of anxiety and depression.

John Cantor presented at our annual industry conference, to a group of electrical contractors. John’s presentation was both entertaining and informative. He presented our delegates with key insights into the processes that he undertook to overcome adversity, and I think that all of our delegates were able to take something away from that – there was certainly a lot of discussion generated later amongst delegates about how much they enjoyed his presentation

Today was a fantastic opportunity to introduce our senior students to adventurer John Cantor, especially as they are set to embark on their own post Year 12 challenges in less than two months. He was inspiring and entertaining; what an amazing young man.

The personal challenges that he overcame through determination, perseverance and resilience was a truly inspiring experience for all involved. John tells his story in an honest, open and engaging manner and even in some of his most trying moments of the expedition, he seems to find a way to find the funny side of what are seemingly incredibly daunting situations. Our players and staff are still talking about the presentation and what they got out of it individually and collectively. As an elite sporting team with a strong focus on developing mental resilience and personal resolve, John’s story has been a terrific example of what can be achieved when you truly set your heart and mind on something.

We enjoyed your humour and motivational words. We suffered in your agony and felt your disappointments. You spoke to the audience with passion and kept us engaged throughout your autobiography of accomplishing your dream. You have inspired others to keep on trying but most importantly to plan and prepare.

John’s story is an inspirational tale of adventure and tenacity. He is well spoken, funny and very open about the trials and tribulations he faced during his many attempts (and eventual success) to traverse the Brooks Range solo.

Your informative and inspirational talk about your successful Brooks Range traverse at our annual ‘Adventure Showcase’ was undeniably the highlight of the day. The event’s theme was skillfully woven throughout your presentation and your approachable personality made it easy for all the attendees to connect to you and relate to your ability to triumph over adversity.

We found your presentation very professional and extremely informative. Our entire team were amazed at the level of commitment you showed to cross the Brooks Range in a record time and found your story very inspirational and motivating.

John is a shining example of what can be achieved with true grit and determination. He is very willing to work within the time frames required of the organiser and as an inspiring speaker he is engaging, informative and adaptive to his audience. Someone who is definitely worth listening to.

All of our guests loved his story and said it was one of the highlights of the day. We loved having John speak for us, he has inspired us all to never give up and follow your dreams even when times get really tough

Importantly, you reminded people that only through trying can we achieve; and that success is measured in multiple ways.