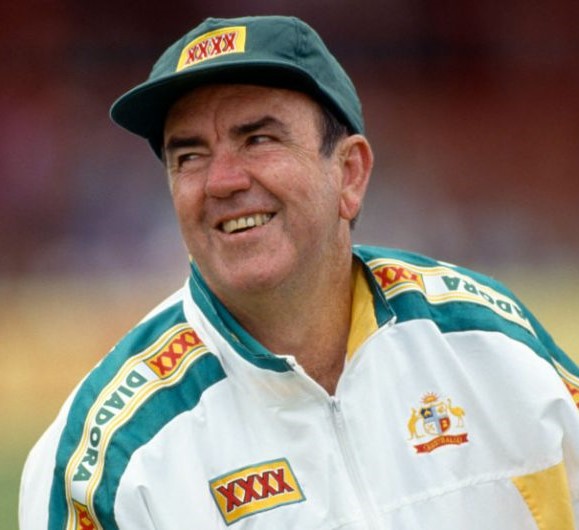 Associate Professor Munjed Al Muderis is an orthopaedic surgeon who has pioneered the revo ...

Luke Heggie is a recognised stand up comedian who is much loved for his dead pan no-nonsen ...

Sally Callie is a triple Olympian rower who truly understands the power of mindset. She su ...

Between 1986 and 1996 Bob took the Australian Cricket Team to a World Cup Victory, three Ashes wins against England and series wins against every other nation, including the West Indies in 1995. In this period Australia developed into the most formidable one-day team in the world.

An accomplished After Dinner and Motivational speaker, Bob Simpson found both skills essential ingredients in developing The Australian Cricket team. He relates the parallels and techniques of developing and maintaining both world class individuals and a world class team.

Bob Simpson has been involved in first class cricket for over 40 years. He was the second youngest player ever in Australian Sheffield Shield Cricket, and his international career began in 1957 when he was chosen to tour South Africa.

In test Cricket Bob’s career blossomed as a opener, and he scored double centuries against the West Indies and England, and his highest score in test cricket of 311 against England.

In the 1963/64 season against South Africa Bob took over the Australian Captaincy from Richie Benaud. During the next four years, Bob built up a fine record as an all rounder and was considered the most brilliant slips fielder of all time..

Bob retired in 1968 at the age of 31, at the height of his run scoring ability, to pursue a business career. A trained journalist, Bob worked for newspapers in England and Australia, as well as the Australian Broadcasting Commission in both Radio and Television.

But when World Series Cricket sought to take over cricket the ACB asked Bob to captain Australia in the Test Series against India. Even though he had been out of Test Cricket for ten years, and at the age of 41, Bob had an outstanding Test Series, scoring two centuries, topping the Test Series and leading his country to an exciting three to two win.

Bob then took the Australian team to the West Indies shortly after, and retired later that year for a second time.

Bob then returned to his Sports Marketing and Management Promotions Company, which he had established five years before, until he was called up as Australian coach.