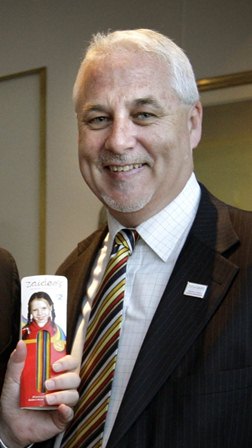 Natalie Bassingthwaighte is an extraordinarily multi-talented Australian celebrity. An act ...

A popular entertainer and true professional, Andrew Daddo is a regular face on Australian ...

After more than a decade on screen, Natarsha Belling has become one of the best-known and ...

In 2004, when Allan and Kim Turner’s daughter Zaidee died suddenly at the age of seven from a cerebral aneurism, their whole world collapsed and life stood still for a moment. Incredibly, they then decided to give the greatest and most unselfish gift they could – they donated their child’s organs and tissue so someone else could live a better life.

Despite his grief, Allan resolved to make a difference and change the way Australians thought when it came to organ and tissue donation. He started Zaidee’s Rainbow Foundation in memory of his daughter and came up with the simple idea of Zaidee’s Rainbow Shoelaces to create awareness in the wider community.

The laces have now become the national symbol for organ and tissue donation awareness. The foundation initially sold just a few thousand pairs in 2006 but that has now grown to over 700,000 pairs worn in support of Zaidee’s story.

Zaidee’s national campaign is the largest in Australian sport and the foundation has been successful in obtaining support from every leading sporting code in Australia with players and teams wearing the shoelaces during games to promote organ and tissue donation.

Despite this, in 2011, 140,000 Australians died and only 337 donated their solid organs. Currently Australia has one of the developed world’s lowest donation rates. This means that Allan is as committed and as passionate as ever about ensuring that awareness continues to grow and inspires people to think about and discuss a difficult and deeply personal subject.

Allan shares his family’s powerful and painful story, taking his audiences on an emotional journey from the loss of his daughter, starting the foundation, how love and passion can spur an individual to make a difference in the community. It is an inspirational and unforgettable story that every person should listen to and it will change the way you approach life each day. It may even inspire your audience to make a difference in their world.

Allan has presented Zaidee’s story to hundreds of thousands of people over the past several years at conferences, business leadership courses and major sporting events. He has also appeared on TV programs such as Sunrise, Today Show and Andrew Denton’s Enough Rope, to name a few.